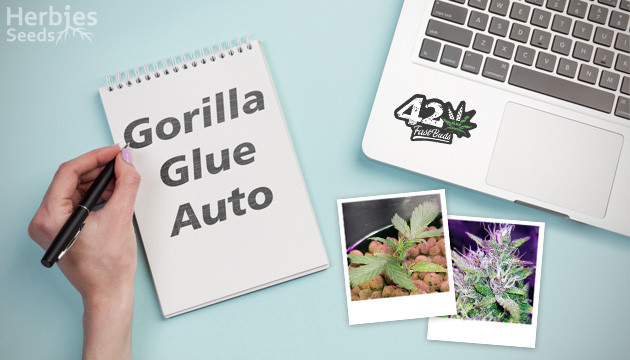 I decided to choose Gorilla Glue autoflower for my very first grow journal because I like to smoke this strain so much. I’m sure I wasn’t disappointed with the choice: although the whole cycle from seed to harvest took longer than I expected, the final harvest was well worth the wait, and the smoke was everything I expected from a great weed strain. 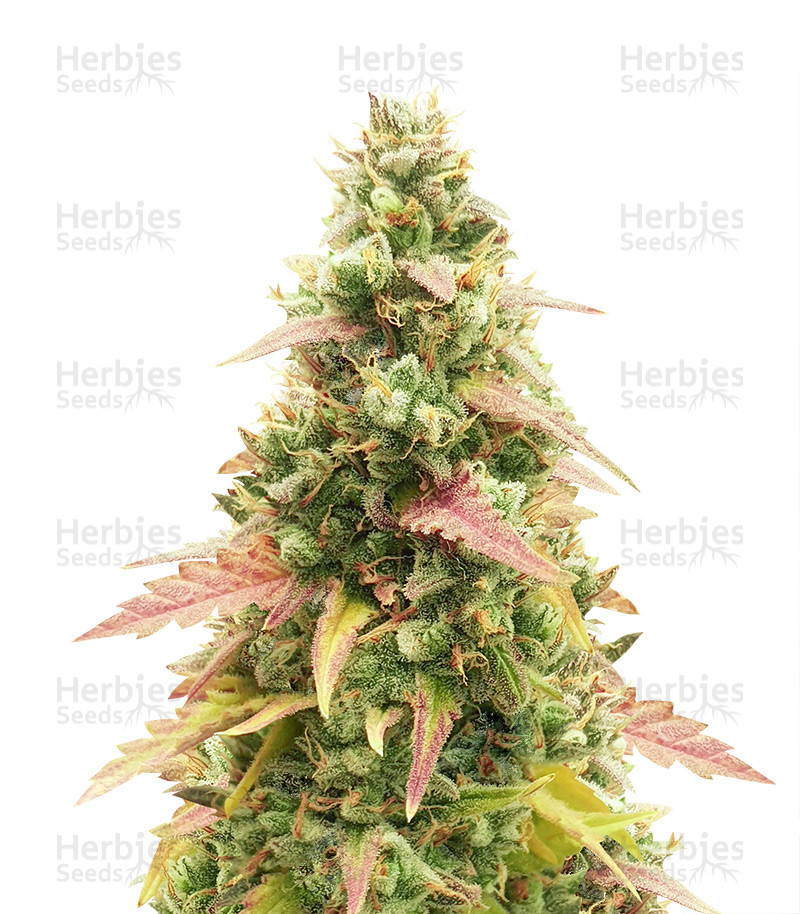 An Organic Grow Right From The Start

As soon as the seed germinated and showed the tap root, I planted it into a container with Biobizz Light Mix and placed it under my 200W LED at 18/6 light schedule. I had to experiment a bit with the distance from the light to hit the sweet spot between too much stretching and the risk of a burn. I also gave my girl her first feeding of Bio-Heaven. 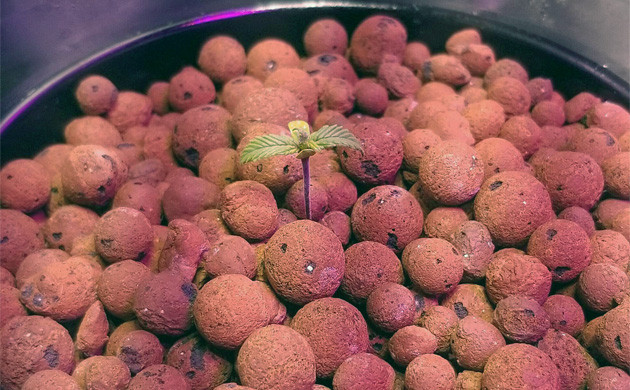 On week 2, I also introduced the Bio-Grow and Fish-Mix and transferred my Gorilla Glue Auto from her initial container into an 11L pot (2.91 gal). I know that repotting autos is something to be avoided if possible, but my plant never even slowed down her growth as a result. The conditions were quite nice and stable: 25°C (77°F) day temperature and 20°C (68°F) at night. I was keeping the relative humidity at 55% by spraying water on the walls of the grow tent. The only thing that bothered me was the lack of an exhaust fan. I could only hope that I’d get away with it or that a regular fan inside the tent would mitigate this problem.

My plant was doing great and I topped her and even began an LST, but then thought better of it. Just didn’t feel right. Anyway, the topping really stimulated the side growth, and the plant turned into a squat, formidably branchy plant.

I extended the feeding regimen with Bio-Bloom and Top-Max in the last two weeks of veg to satisfy any of my plant’s future needs in flowering nutrients. Another important additive that I began to use was Sensi Cal-Mag Xtra by Advanced Nutrients.

Gorilla Glue Auto Week 4: Some Important Changes to The Setup 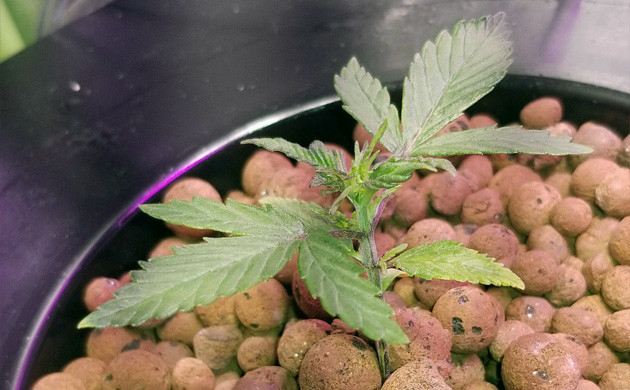 I had to make some improvements, including hanging up a new light (SF 2000) which basically turned my tent into a hot oven. I had to keep it open during the day to bring the temperature down to the target level of 25°C. Still, the leaves suffered from heat stress and looked parched - too light-colored, uneven, and with prominent veins. I also finally installed a small exhaust fan and a humidifier to make things more professional. 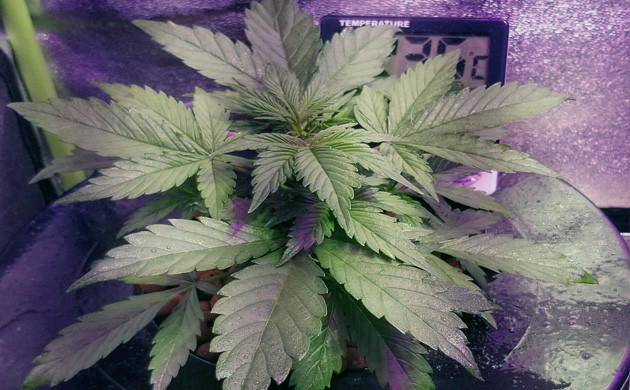 It was week 5 from seed when I saw the first narrow ‘quills’ at the tops which is a clear sign that the flowering was underway. The bush remained short, dense, and completely impenetrable. I even had to remove some of the lower branches.

My Gorilla Glue Auto turned out a very thirsty plant which even posed some difficulties because I often found out too late that the container got light and needed watering. So I had to witness again and again how she looked droopy one day and perky the next, without any apparent reason. I guess it was at least partly because of the light which hardly fit my grow tent and was hanging a little too close to the tops. Too much light and heat was probably also the reason I kept seeing some tacoing on leaves and some bronze spots hinting at the calcium deficiency.

Still, though a bit of a drama queen, my Gorilla Glue Auto looked gorgeous. She continued to stretch the branches all through weeks 1-5 of flowering and to spread wide, threatening to overcrowd my tiny tent. Some light defoliation that I did in the first and again in the third week of flowering soon seemed like a vague memory, but the buds seemed to fill out nicely even far down the stem.

Time To Cut Down On The Grow Nutes 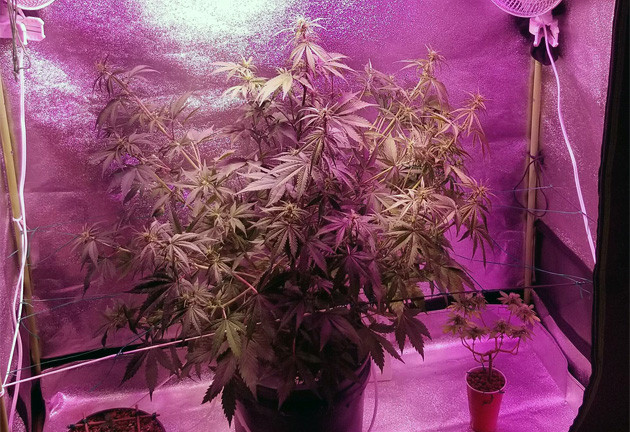 In the 7th week of flowering, I decided to put my girl on a diet and see how she’d manage without the ‘Grow’ component. I must say she reacted favourably; some leaves began to yellow, but the colas kept getting fatter. The smell of citrus became strong, and I was glad that for my first grow I chose my favourite genetics. 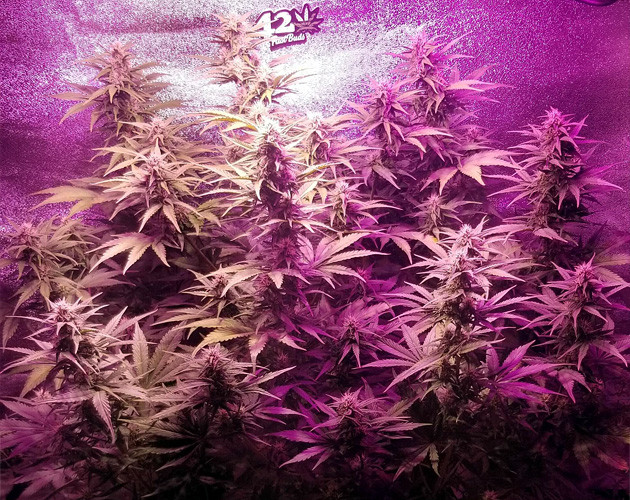 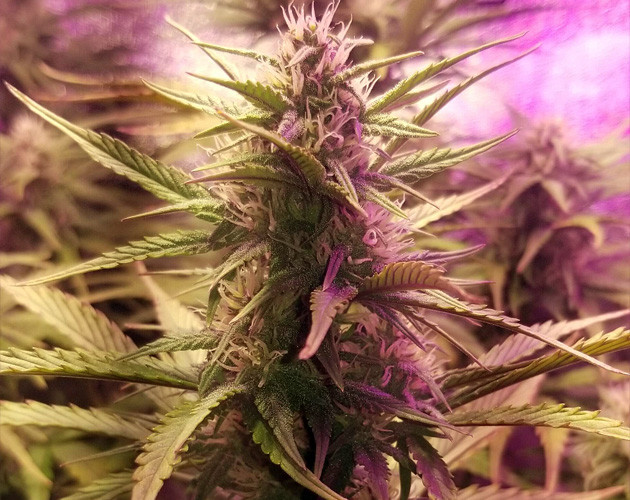 On week 9 of flowering, there were a lot of orange pistils and hungry-looking leaves, but the buds kept getting fatter and fatter by the day. The calyxes and sugar leaves were frosted with trichomes, but those looked clear so far. 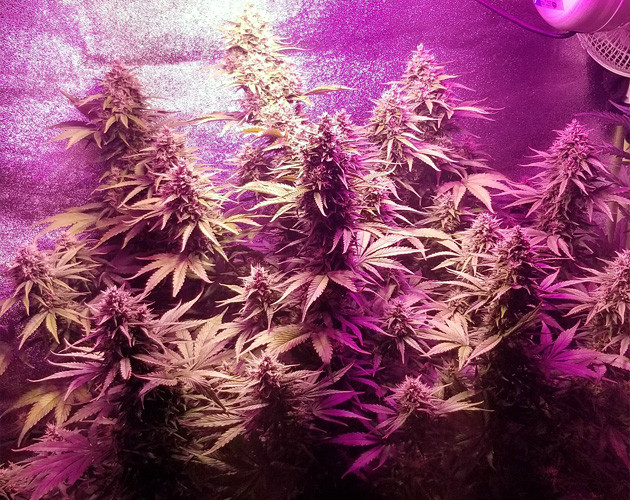 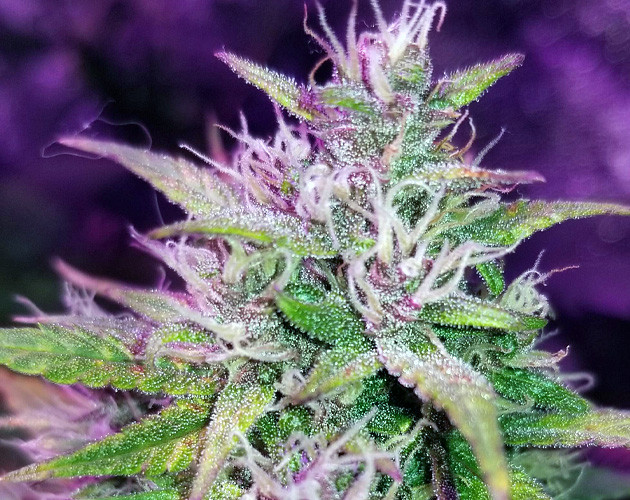 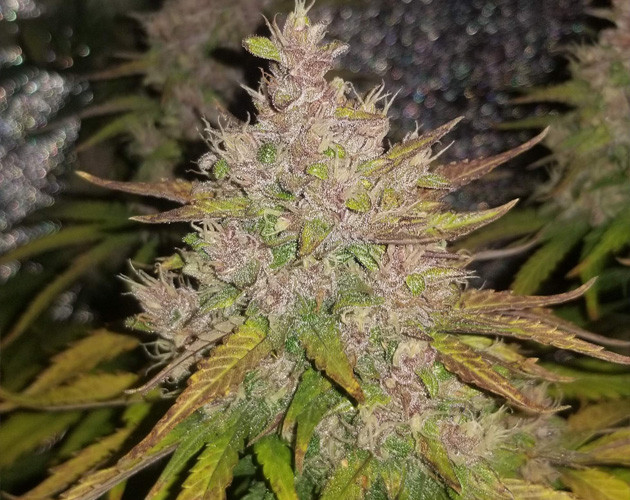 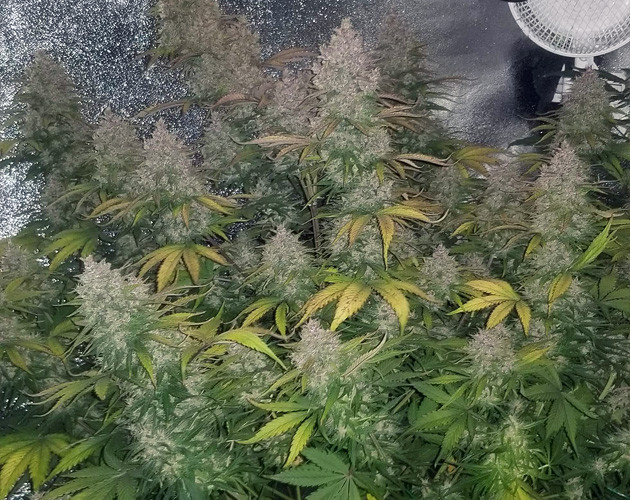 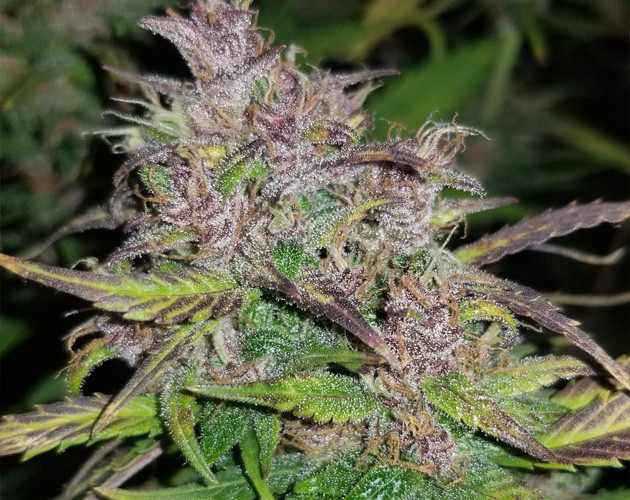 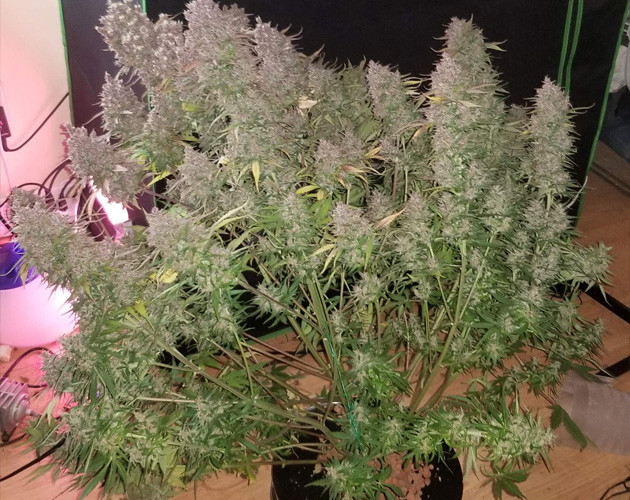 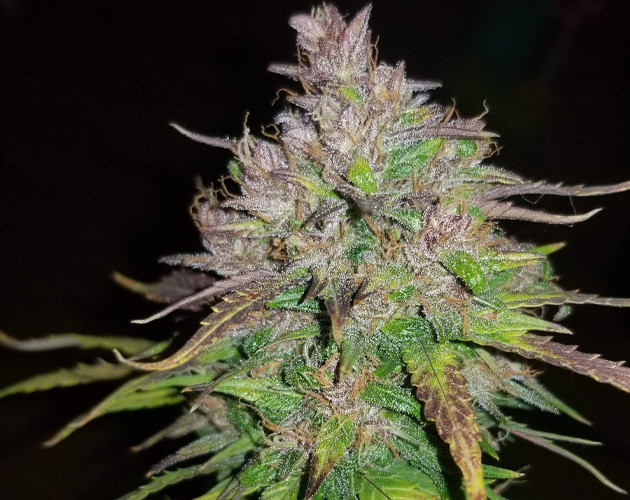 I had to keep her for two more full weeks because I was waiting for amber trichs on flowers. not just the trim leaves. As a result, the colas looked dark-colored and mature at the end. All the time, I continued to feed her, but that didn’t hurt the taste when I finally felt like chopping my lady — after 11 weeks in flower. 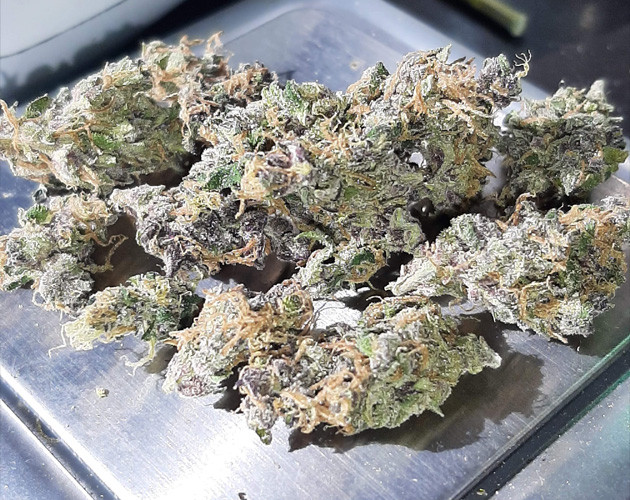 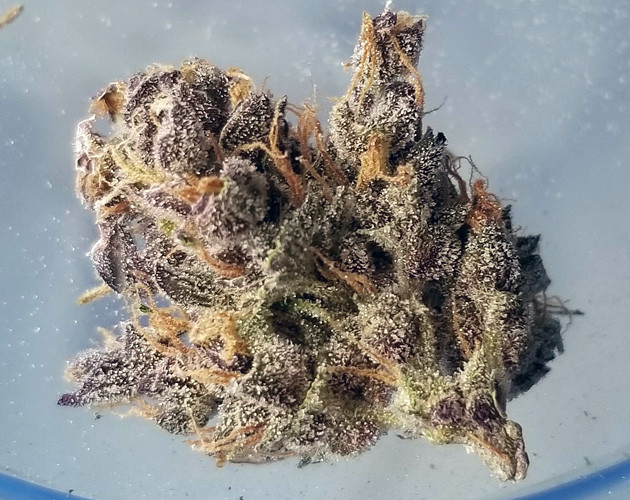 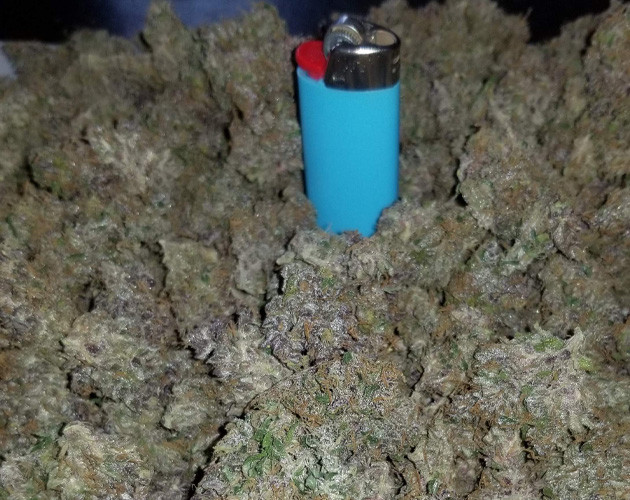 I test-smoked the buds right away: the taste was hard to define of course, but the smoke was very smooth on the throat and didn’t make me cough at all. Unfortunately, it was only after I had gifted some of the buds that I decided to weigh the rest. The scales showed 290g of dried stuff. That included some stems of course, but in my experience those don’t weigh much. Eventually, I had to buy more glass jars and Boveda packs. I was also very pleased with the type of effect: Gorilla Glue Auto was making me very high, happy, and giggly. Perfect! 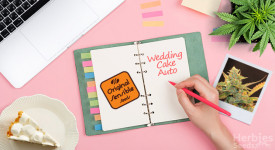 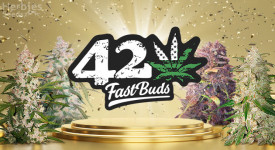 27 July 2020
Autoflowering Vs. Photoperiod: Definition, Grow Info And More
Comments:
0
JackGeezy
24.05.2022, 21:53
Growing the same strain, only about two weeks in, hope my plants grow as well as this one
﻿Reply
0
KizzyKush
03.12.2021, 01:22
What did your growing medium consist of? It appears clay pebbles, but anything else in there? And if so what were mix ratios and/your medium layers?
Reply
0
Herbies
05.12.2021, 10:01
Hello KizzyKush,It is Biobizz Light Mix, but you can go with any sufficient one
Reply
0
Eric
15.07.2021, 19:20
Excellent post bro, congratulations! I am having the same variety of cars from another bank, I am finishing the 9th week and looking for information I found myself here, well complications that you had that did not prevent a great development and production, I read that they are very resistant to pruning and heat and I agree with everything previously reported, excellent
Reply
0
Joseph
22.05.2021, 20:30
Very nice, didn’t really seem like an auto though...lol, 15 weeks is a pretty long time for an auto isn’t it? Nice yield though and I like the way you waited for the amber (which probably accounts for the 15 weeks)....
Reply
0
Herbies
22.05.2021, 21:52
Hello Joseph, that's indeed a long time for an auto, what were the conditions for that plant?
Reply
Add new comment