Girl Scout Cookies is a family of marijuana strains that originated in California in the early 2010s and became an instant hit, resulting in a buying frenzy in dispensaries, rave reviews on Reddit and scores of awards in competitions. The best GSC samples have small but rock-hard and frosty nugs, offer sweet smell of freshly-baked pastries, and provide the extreme euphoric effects that balance Sativa’s happy mental stimulation with Indica’s profound relaxation. The good news is that you can now buy several versions of this famous weed in seed form and start your own hunt for the best Girl Scout Cookies phenotype.

Who Invented GSC And What’s Its Family Tree?

What info we do have is mostly rumors. It’s believed that the founder of Girl Scout Cookies is Gilbert Millam, aka Berner, the well-known rapper and cannabis entrepreneur. Together with his associates from underground growing collective Cookie Fam, he bred this award-winning marijuana strain by crossing an OG Kush from Florida with their own F1 Durban Poison. Considering OG Kush is an Indica-dominant hybrid hailing from Hindukush in Afghanistan and Durban is a pure South African Sativa, one shouldn’t be surprised by the top-tier qualities of their offspring – such genetic diversity usually does produce incredible results.

Berner introduced Girl Scout Cookies to his friend, Whiz Khalifa, and it instantly shot to stardom. It’s been grown in commercial quantities and dominated the shelves of West Coast dispensaries ever since. Of course, this new celebrity couldn’t help but go global, and it’s now available as feminized seeds to growers in the EU and UK and the rest of the world. It’s won many prestigious international awards, including first prize for Best Hybrid at the Southern California Cannabis Cup in 2013.

Any success story in the realm of cannabis starts with mind-boggling THC levels, and Girl Scout Cookies is no exception. So, if you’re wondering if this weed might be overrated, consider the fact that its THC content usually starts at 20% in total dry weight of the buds and sometimes gets as high as 28%!

Whether you’re an Indica or Sativa enthusiast, you’ll find something here to your liking. GSC starts all in the head, making you giddy and inducing helpless giggling and a ringing in your ears. This burst of happiness and euphoria then starts radiating throughout your entire body. Sometimes the effects come in waves, with surges of mental energy one moment and full body melting the next. Although you’ll get enough cerebral stimulation from the 40% Sativa makeup, the other 60% of Indica will make you too relaxed for action.

Girl Scout Cookies is best used to quietly contemplate the world rather than try and change it, so walk your dog, feed your fish and renew your Netflix subscription before you dab this. Alternatively, use it in the company of friends or even people you’ve just met – GSC can turn even a wallflower into a motormouth.

CBD levels in this weed are close to zero, yet GSC is insanely popular among medical patients who use it for managing chronic pain, migraines and gastrointestinal problems (in hearty doses), as well as for depression and PTSD (here, micro-dosing will work best).

Both Smell And Flavors Are Redolent Of Pastries

The name of the strain suggests that when you open a jar of cured buds, you’ll be overwhelmed by the sweet smell that actually reminds one of cookies sold by the Girl Scouts, with their hints of mint and chocolate. Add to this the rich Indica-like earthiness that only gets stronger when you break up the nuggets, along with the spicy aromas contributed by the OG parent, with some old-school skunk and a fruity whiff of something like citrus.

This unique terpene profile that’s dominated by the peppery caryophyllene and hoppy humulene comes through in the taste as well, making the smoke lip-smacking delicious. Of course, as is the case with many celebrity genetics, these sought-after flavors won’t be present in all plants that you grow. So, buy as many seeds as you can and hope for the best – what you’re looking for is definitely out there somewhere.

Some Grow Tips To Increase The Production 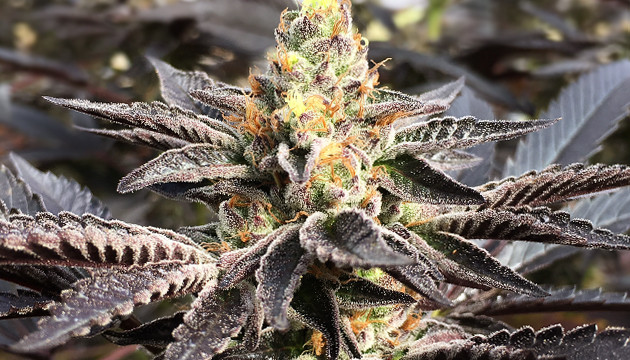 Girl Scout Cookies is so good that it could be your ultimate cash crop. It’s a shame it doesn’t bring monster yields, too – growers can expect only around 300 grams both per square meter indoors and per plant when grown outdoors. However, we have some tips how to remedy this situation. This weed can be grown outdoors and harvested by mid-October, but only if your climate is both sunny AND dry. In less hospitable regions, try the greenhouse. Indoors, the flowering time is 9-10 weeks, and here, low air humidity (down to 30% at harvest time) will not only help prevent mold problems (although the strain is not especially susceptible to mold and other diseases), but also increase trichome production.

Try growing your plants SOG-style, vegging them for two weeks or until they reach the height of 25cm, and then inducing flowering, to achieve the best possible results, especially in hydroponic setups. Other techniques such as LST and HST aren’t as effective, but still better than letting your plants grow naturally. If you want your flowers to produce as many terpenes as possible, lower the temperature (23-24°C would be ideal), go easy on the feeding and use organic nutrients whenever possible.

In any case, you’ll get medium-sized and branchy plants with short internodes but long leaf stalks (petioles). The buds will be slim but super dense, with extra-large calyxes and almost no sugar leaves – ideal for trimming.

What’s The Best In The Long List Of GSC Strains?

When buying Girl Scout Cookies seeds, every grower hopes to find that rare outstanding pheno that’s the real deal. You now know what it should smell, taste and look like and what its effects should be. American stoners can try to obtain different clones, including the famous forum cut, the Thin Mints pheno, with its distinct menthol aroma, or the mysterious ‘naughty’ pheno or the Platinum pheno (this latter the only one whose CBD levels approach 1%). However, international growers are also blessed with an abundance of seeds offered by at least a dozen producers. These seeds can be in feminized, regular and even autoflowering form. The latter version was developed by FastBuds, whose mission is to introduce all famous US varieties into the European seed market.

Dear customers,
Due to quarantine measures tightening designed to prevent the spread of COVID-19, regretfully, we are forced to suspend work of our warehouse and sending of orders till April, 14 minimum.
Our consultants will be available from Monday to Friday from 9-18 o'clock New York time or from 14:00 - 23:00 London time.
We continue accepting orders and we offer you to make a reservation till shipments are available again. As a bonus for waiting we offer you 5 extra bonus seeds to your order.
We apologize for any inconvenience. Stay safe and take care of your loved ones!