How To Grow Purple Cannabis 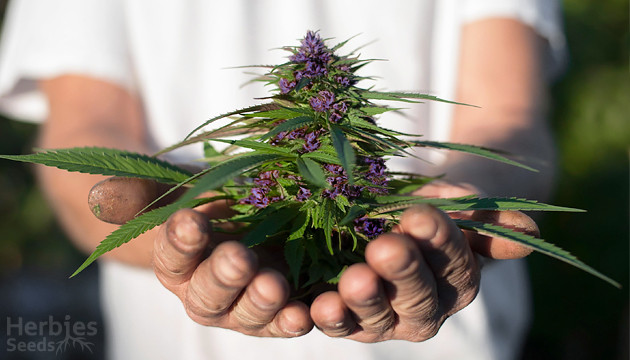 Despite the fact that weed is often referred to as “green” or “grass”, sometimes cannabis plants mature and turn purple instead of the more commonly expected emerald. What does this mean for the plant and its user? Unusual plant color has brought many myths to life that we’re going to debunk in this article. Keep on reading and you’ll soon find out what it means if a cannabis plant is purple rather than green, and what one needs to do to grow a plant of unusual hues.

Most cannabis varieties and plants in general are green for a reason. Green is the color of chlorophyll, the chemical compound responsible for the process of photosynthesis, which helps plants convert solar energy into nutrients for growth. Besides chlorophyll, among other colorful compounds, most plants also contain anthocyanin, which is purple in color. However, because of the chlorophyll’s prevalence, we never really get to see purple hues in most plants. Usually, this is only possible in fall, when plants stop photosynthesizing and molecules of chlorophyll break down to reveal everything that’s underneath, including orange carotenoids and purple anthocyanins. Hence, plants that are purple instead of green in summer partly rely on anthocyanin instead of chlorophyll for photosynthesis. Although not that common, anthocyanin can still effectively absorb light and produce energy. 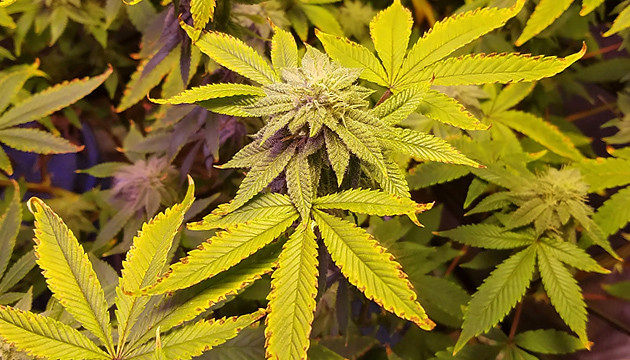 Because of the connection of some cannabis strains’ purple color to the way they consume and produce energy, many myths have sprung up. Believing them will make you deprive your plants of either oxygen or CO2 in miserable attempts to see them miraculously turn blue or purple. There’s something you need to read before making such a mistake: this simply won’t work! The same goes when feeding cannabis extra nitrogen – the only change in color you’ll see after following such advice will be from healthy bright green to sickly yellow, the sign of nutrient burn.

Desperate growers sometimes go as far as using artificial dyes in an attempt to eventually treat themselves with exotic buds. They should remember once and for all that the color of the harvest is already encoded in the seed’s DNA, and if a certain cannabis plant is not predisposed to turning purple at some point, it simply won’t. Is it even worth it? Bag appeal aside, there hasn’t been any scientific evidence of the increased quality or potency of purple cannabis. One thing for sure though, smoking purple marijuana is by far more memorable. Hence, if the experience is good, users will more likely tell everyone about how much better purple cannabis is – and that’s probably how all the myths started.

How To Effectively Turn Cannabis Purple

Now that you’re aware of the things that will never be helpful in turning your cannabis plants purple, let’s move on to a couple of tricks that actually work. There’s not much within your control, but if you follow these steps, you can actually decorate your marijuana garden with some cool (literally) purple and blue hues. 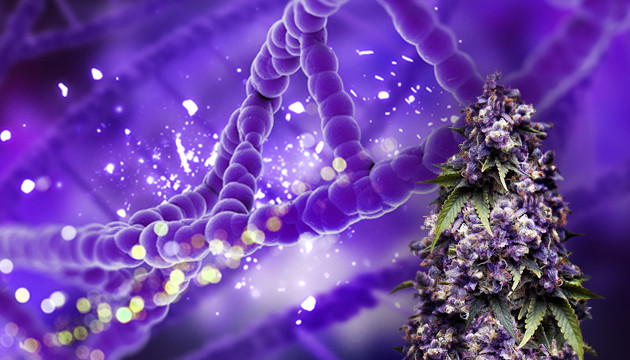 The number one rule of growing purple-colored cannabis couldn’t be any more straightforward. Following it would save lots of time and energy to any poor grower who tried to deprive their plants of nutrients and failed. We’ve already mentioned previously in this article that in order to turn purple at one point or another, marijuana plants should be genetically predisposed to the change in color. Thus, if you want to harvest exotic purple buds, there’s nothing you can do but shop specifically for purple weed strains. The demand for them in the modern weed market is huge, so many seed banks are willing to invest in research and purposeful breeding aimed at creating cannabis strains with purple leaves and buds. Later on in this article, we’ll share our picks for some of the greatest purple strains currently available. 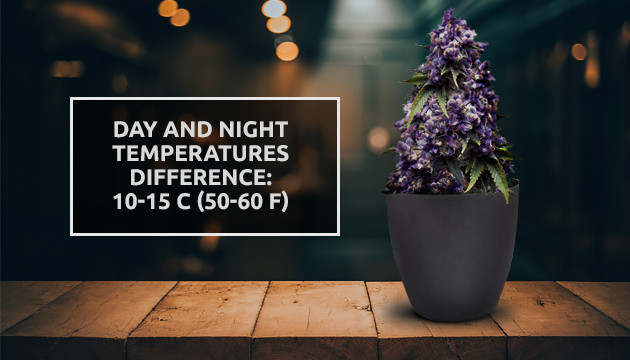 Just as trees leaves turn yellow and red in fall, so do cannabis plants turn purple as a reaction to the change in seasons. So, even if you’ve purchased and planted seeds of custom-bred purple cannabis, you likely won’t see the desired shades of purple until at least mid-flowering, when temperatures outside get colder, especially at night. The exact reason behind the change in color is that colder temperatures cause molecules of chlorophyll to break down, exposing the purple and blue anthocyanin. One simple trick that’s going to help you reveal as many molecules of anthocyanin as possible, especially if you’re growing in a warm growing tent indoors, is lowering temperatures at night. 10-15 C (50-60 F) amplitude between day and night temperatures starting in the middle of the flowering stage is a safe bet for successfully mimicking the coming of the fall. Do this for several nights in a row and you’ll definitely notice how much more pronounced the colors of the buds and leaves have become. In fact, you might even notice the cannabis branches turning purple as well.

Purple Strains Worthy Of Your Attention

Now you know the truth behind weed’s novel purple hues. If you want to significantly increase the bag appeal of your next harvest, invest in a purple cannabis strain created specifically for delivering stunning buds of this rare color. The following are four purple cannabis strains to which you can trust your time and money. Purple Lemonade – Bright Inside And Out

FastBuds, the breeder behind Purple Lemonade, shamelessly calls this marijuana variety the best purple strain they’ve ever created. It’s certainly one of the prettiest strains out there thanks to the eye-catching contrast between bright green stems, purple buds and gradient leaves. The effect of this Indica-dominant strain is a play of contrasts as well – the long-lasting feeling of full-body calm and relaxation suddenly gives way to unexpected kicks of energy. And it’s not called Lemonade for no reason – this cannabis strain grants a juicy mix of citrus and sweetness in both taste and aroma. Purple Punch – A Punch Of Sedation

Barney’s Farm’s Purple Punch comes in a stunning dark purple that borderlines decadent chocolate brown. However, it’s not only exceptionally beautiful but also dramatically productive. Each plant of Purple Punch is able to produce up to 2 kilograms (4.4 pounds) of trichome-laden buds. And that’s perfect, because the taste of baked apples and spice is quite addictive!  The effects are sedative in nature, while the 25% THC content can immediately couch-lock unprepared novice users.

Mimosa Evo – The One From The Fantasies

If you’re looking to have the best possible experience with a purple strain, one of the first candidates will unmistakably be Mimosa Evo by Barney’s Farm. One of the top strains from this breeder, Mimosa Evo boasts a tropical flavor with natural notes of zesty citrus fruit. You’ll instantly notice complementing sweet berry aromas as well. This delicious cannabis strain also has a long-lasting cerebral effect that makes it a literal dream for many users and growers. In terms of appearance, Mimosa Evo will strike you with its spiky burgundy-colored leaves growing from a thick, light green central cola – simply gorgeous. Just a year later after being established in 2002, Blimburn Seeds presented Granddaddy Purple, a famous purple strain that brought the seed bank to stardom with multiple awards and instant worldwide recognition. Its fat buds fashion hues from green to blue and purple. The color of the flowers gives hints as to the terpene profile of the strain, its taste combining ripe red grapes and wild berries. The effect of Granddaddy Purple is also up to par with the taste – it’s described as cerebral, Indica-like and highly medicinal.

Are There Other Colors Of Cannabis?

Despite the fact that the primary shade anthocyanin gives to cannabis is purple, depending on the soil’s pH and nutrient balance, it can also reveal itself in various hues of red, blue and even black! Aside from the buds themselves, another part of cannabis that brings color to the plant is its pistils. When the season changes, these are the first to turn from light green and white to fiery orange, yellow or bright brown. One more color accent that’s often noticed in cannabis plants is provided by cannabis resin glands, or trichomes. Some weed strains like White Widow are so abundantly covered in white trichomes that they look white from top to bottom, as though completely covered in snow. Hence, depending on the strain and phenotype, cannabis can be a combination of all those colors – a beautifully colorful sight!

Purple cannabis can be a great decoration for any marijuana garden, and eventually the ultimate addition to bag appeal of the final product. No wonder such a novelty creates an aura of mystery and provokes many myths to appear. Hopefully, this article has helped you realize the truth behind the purple color of cannabis and the methods of achieving growing this yourself.

What has your experience with purple strains been like? Feel free to share in the comments below – we at Herbies really want to know!

﻿Liked Like 2
Extracting THC With Alcohol: 2 Main DIY Techniques
Got Leftover Stems? Here’s How To Brew Tea With Them
Keep reading 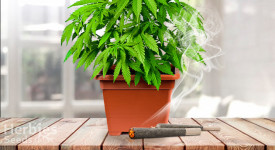 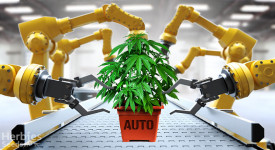 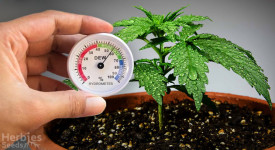 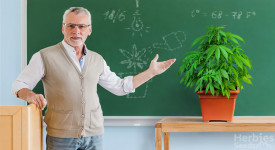 20 April 2020
The Vegetative Stage: Everything There Is To Know About It 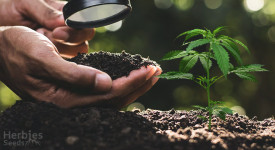 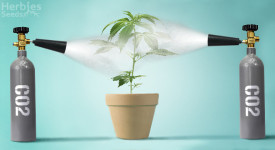 7 May 2020
What Role Does CO2 Play In Cannabis Growing?
Comments:
0
Bob Donaldson
10.04.2020, 01:53
Thanks for the insight. It always seems silly when "experts" say that it's okay to overfeed & suffocate plants. I recently bought Blue Dream from your fine establishment, and as a fan of blue, I'm itching to start this grow.
﻿Reply
0
Herbies
10.04.2020, 21:47
Hello Bob, thank you for you feedback to the article. We wish you best of luck in your hobby and hope to see you back at Herbies soon!
Reply
Add new comment