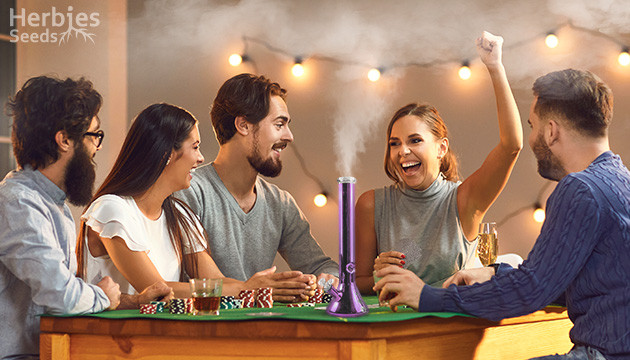 Today, we’re back with a new list of fun smoking games to play while high. Plenty of practice has shown that these games are also perfect for when you want to get high as never before while also sharing a great moment with your friends. Ready for nine more ideas for a great time? Let’s go! 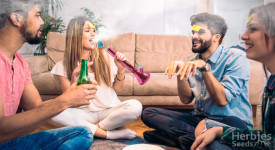 If you ever wanted to be on the hit TV show American Ninja Warrior but have always preferred smoking weed to exercising, this hit from our list of weed challenges will finally bring you to the pedestal! All you need to do is form a team of warriors who’s will to get high is stronger than their fear of getting injured! Just kidding, injuries are unlikely, but you still need to be careful. Grab pillows, chairs, blankets, and other household items to create a long enough obstacle course with stop-n-smoke points along the way. These points are the reward for successful completion of a portion of the course. Can you imagine how high everyone will be by the time they finish the distance? Make sure to be timing each contestant’s results to see who’s the best Stoner Ninja Warrior of the group, and don’t forget to give them a nice prize at the end!

Traffic Lights is one of the few smoking games for two on this list. It’s super simple, too! It starts with the first person taking a single hit of marijuana and passing it on to the second person, who also takes a hit and passes the joint back. In the next round, each of the two players takes two hits, followed by a round of three hits and so on. Another twist is that while one person is smoking, someone else is supposed to keep the smoke in. This, along with the number of puffs, will get you really high really quick! As it’s so much smoking, we advise playing this game with lighter cannabis strains that won’t let you green out. 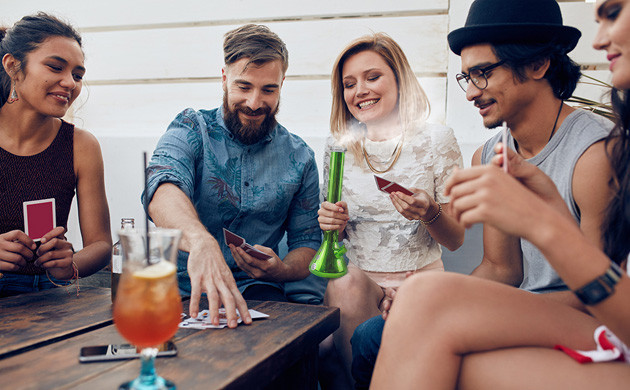 Kings is an extremely fun and unpredictable bong smoking game that’s already found its way to many parties, and now it can come to yours! To play weed Kings, you’ll need a bong, joints, and a deck of cards. Shuffle the cards well and place them all in a circle around the bong. For each type of card in the deck, you need to make a rule that will be followed by the person who draws it. For example, each Queen can mean take a bong hit, each 6 pass the turn, each 10 everyone get silent, the first person to break the silence to take a hit, and so on. There are plenty of King variants online if you don’t want to come up with the rules yourself. However, there are some rules that always stays the same: players draw cards one by one and do what the card they’ve drawn says, and drawing a King means you need to make up a rule that everyone is going to follow until the next King is drawn. This is where you can let your creative juices flow and turn the game completely upside down!

Stoner With A Straight Face

Weed and giggles always go hand in hand, and this is what makes Stoner with a Straight Face so challenging! Whenever you smoke in a group of friends, just shout “stoner with a straight face!” That’s your signal to come up with a penalty for the loser and start one of the best joint games out there. Proceed to smoke as usual while keeping a straight face. The more you smoke, the harder it gets! And trust us, once somebody’s cracked, the laughter will be impossible to stop, so just go with it and watch the person who was first to laugh face the punishment – a second wave of laughter guaranteed! 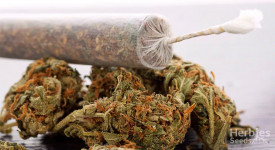 How To Roll A Perfect Joint 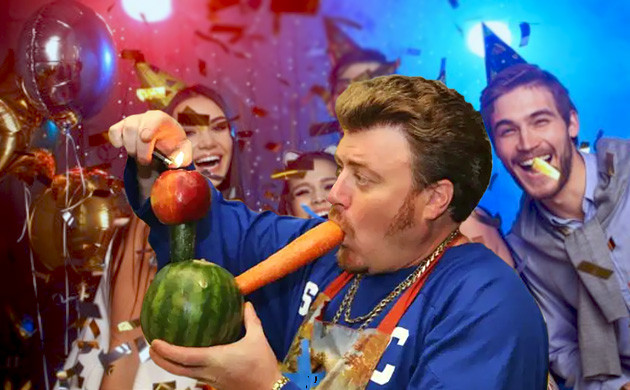 Unlike the rest of the smoking games on this list, Marijuana MacGyver ends before everyone gets high! And that’s perfect, because it creates an opportunity to play one game more. The rules of Marijuana MacGyver are as follows: everyone participating has 5 minutes to go around the house and find an item they think they can turn into a smoking device. Then, after everyone has gathered their materials, it's crafting time! At the end, all the participants showcase their DIY smoking devices and the group votes to decide on the winning piece, which everyone is going to use to finally get blazed. However, the rules are not set in stone, and the losing pieces can also be put to use. 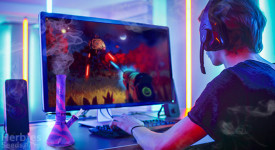 Weed games and movies have always gone really well together in any party setting! Now, there’s one more reason to love this pairing. If you were planning to smoke one and relax on a couch with a great movie, why not make it even more entertaining and get even higher at the same time? To play Movie Time, prepare some joints or bowls and pick a movie to watch. Then, with everyone participating, decide on a reoccurring detail of the movie to use as a signal for taking a hit. For example, if you’re watching a horror, decide to toke every time somebody screams, or if it’s an action-movie, smoke every time there’s an on-screen fight. If a character in the movie is known for a famous catchphrase, make it another signal too! You can make as many rules as you want, depending on how high you want to become by the time the movie ends. 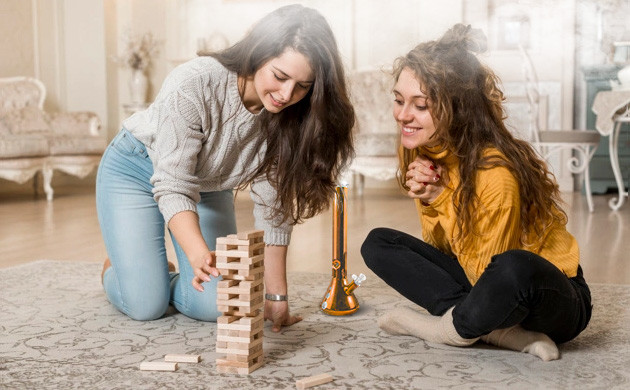 Jenga is great! Jenga high? Even better! Jenga that MAKES you high? As good as it gets! For the smoking game version of this all-time classic, get a Jenga set and use a Sharpie to write new rules on its wooden blocks. Get creative here with anything, from take a puff and only use your left hand till the end of the game to skip the next turn and let another player control your hand in the next turn. To make things start off right, each person should take a couple of hits before starting the game. Assemble the tower and start taking out the blocks one by one just like in regular Jenga. If you pull out a block with a rule, do what it says. The player who causes the tower to fall has to face a punishment – giving their joint to the rest of the group to finish.

Last Man Standing is one of those weed games that can help you get baked to the point of no return in a matter of minutes. If you were going to do so anyway, why not add an element of healthy competition in there? For Last Man Standing, you’ll need a bong, or even two if the group of players is large, and enough weed to get everyone high as a kite. Players take puffs one by one, getting blazed out of their minds. As the number of rounds grows, soon there’s going to be a player who can’t take a hit more, otherwise they’ll pass out. They declare they’re out and go on enjoying the evening, while the game continues until there’s, well, one last person standing! Before the game starts, don’t forget to decide on the prize for the winner to raise the stakes of the competition.

Greenjack is a stoner version of the classic card game, Blackjack. The biggest difference here is that it’s much safer, as you’ll be playing not with money, but with hits of weed! As in the classic game, the main goal is not to go over 21, but still get the closest to it as possible. The winner of each round receives a congratulatory toke of weed, and the game continues for as long as there’s still weed to play for. Interestingly, having the high at stake can turn people into real gamblers as much as money does! However, the outcome is always positive and friendships only grow stronger.

The World Is Your Playground

Smoking a joint is fun by itself, but now you’ve got a better idea of how to bring your favorite activity to a whole new level! Pick a game, bring your friends together, and get ready for a night to remember! 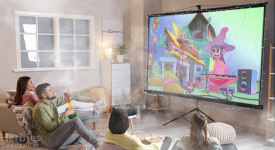 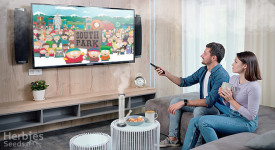 17 July 2020
“Wanna Get High?”: Your Guide To Weed-Themed South Park Episodes
Comments:
0
Kawy Thowy
12.01.2022, 14:00
I hate that pot is still viewed as being a dangerous drug or causes you to do violent things. The only thing getting murdered when I'm high is some Doritos.
﻿Reply
Add new comment